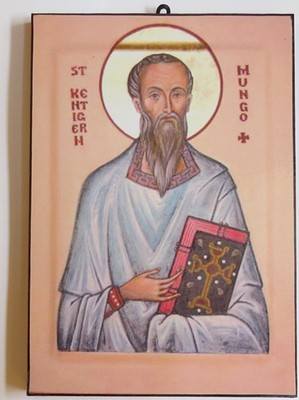 Saint Mungo, better known to us as Saint Kentigern, (Cyndeyrn Garthwys in Welsh), was the late 6th century apostle of the Brythonic Kingdom of what is now Strathclyde in modern Scotland. He is also founder of the city of Glasgow and its patron saint.

Mungo was brought up by Saint Serf who was ministering to the Picts in that area. It was Serf who gave him his popular pet-name. At the age of twenty-five, Mungo began his missionary labours on the Clyde, on the site of modern Glasgow. Christianity had been introduced to the region by Saint Ninian and his followers welcomed the saint and procured his consecration by an Irish bishop. He built his church across the water from an extinct volcano, next to the Molendinar Burn, where the present medieval cathedral now stands. For some thirteen years, he laboured in the district, living a most austere life in a small cell and making many converts by his holy example and his preaching.

A strong anti-Christian movement in Strathclyde, headed by a certain King Morken, compelled Mungo to leave the district, and he retired to Wales, via Cumbria, staying for a time with Saint David at St David's, and afterwards moving on to Gwynedd where he founded a cathedral at Llanelwy (St Asaph in English). While there, he undertook a pilgrimage to Rome. However, the new King of Strathclyde, Riderch Hael, invited Mungo to return to his kingdom. He decided to go and appointed Saint Asaph/Asaff as Bishop of Llanelwy in his place.

For some years, Mungo fixed his Episcopal seat at Hoddom in Dumfriesshire, evangelising thence the district of Galloway. He eventually returned to Glasgow where a large community grew up around him, becoming known as Clas-gu (meaning the 'dear family'). It was nearby, in Kilmacolm, that he was visited by Saint Columba, who was at that time labouring in Strathtay. The two saints embraced, held long converse, and exchanged their pastoral staves. In old age, Mungo became very feeble and his chin had to be set in place with a bandage. He is said to have died in his bath, on Sunday 13 January.