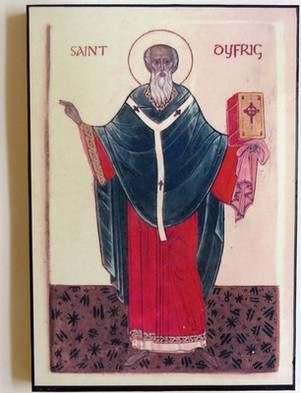 St. Dyfrig was the son of the unmarried Princess Efrddyl, daughter of King Peibio Clafrog (the Leprous) of Ergyng. The King was furious when he discovered his daughter was pregnant, some say because he was the father of her child, and he tried to destroy her by casting her into the River. He failed and Dyfrig was born at Chilstone (Child's Stone) in the parish of Madley (Herefords), traditionally in the mid-6th century.

When the baby Dyfrig kissed his grandfather, he cured him of his leprosy and the King Peibio quickly grew to love him. He gave him the whole area around Madley called Ynys Efrddyl. Here, Dyfrig, who had grown up a Christian, founded a monastery at Hennllann (Hentland) where he entered the religious life. After seven years, he founded a second establishment at Moccas and, at these two places, he became the tutor of many saints: Teilo, Samson, Ufelfyw, Merchwyn, Elwredd, Gwnwyn, Cynwal, Arthfoddw, Cynnwr, Arwystl, Inabwy, Cynfran, Gwrfan, Elhaern, Iddneu, Gwrddogwy, Gwernabwy, Ieuan, Aeddan and Cynfarch amongst them. Dyfrig became Bishop of Ergyng, probably from Caer-Ergyng (Weston-under-Penyard) and then Bishop of the whole of Glywysing & Gwent. Later, he was supposedly, raised to be Archbishop of Wales by St. Germanus, with his base at Caerleon. In this capacity, he is said have consecrated St. Deiniol as Bishop of Bangor Fawr and to have crowned the High-King Arthur at Caer Fudi (variously thought to be Silchester or Woodchester).

Dyfrig was a great friend of St. Illtud and supported him in the foundation of Llanilltud Fawr Abbey (Llantwit Major) which he often visited. He would always spend lent on Ynys Byr (Caldy Island) nearby and consecrated St. Samson as Bishop of Dol there in AD 521. He also liked to call upon St. Cadog at Llancarfan and had a small cell built a mile away where the Fynnon Ddyfrig still survives.

In AD 545, Archbishop Dyfrig attended the Synod of Llandewi Brefi in order to condemn the Pelagian Heresy and, with St. Deiniol, persuaded St. Dewi to also attend. The latter spoke so eloquently that Dyfrig resigned his Archiepiscopate in Dewi's favour. Dewi moved the Archiepiscopal See to Mynyw (St. Davids) while Dyfrig retired to the Abbey on Ynys Enlli (Bardsey). He was not there long before he died (on 14th November) and was buried within the monastic confines. His body was later translated to Llandaff Cathedral, in 1120, where his shrine can still be seen today.

Dyfrig is amongst the most important of early Welsh saints, despite the fact that the area in which he was active is now part of the English county of Herefordshire. Most details of his life appear only in the unreliable Book of Llandaff (early 12th century) where a number of forged charters bearing his name can also be found; but he was certainly an historical character and important religious figure as referenced in the 7th century Breton Life of St. Samson. Most difficult to tie down is the exact period of his episcopate. Traditionally this was in the late 6th century, his death occurring in AD 612. However, it is generally agreed that this is much too late and a death date of AD 550 or even earlier, perhaps AD 532, is now favoured. Bartrum suggested Dyfrig was born around AD 465, though this would preclude his traditional family relationships.