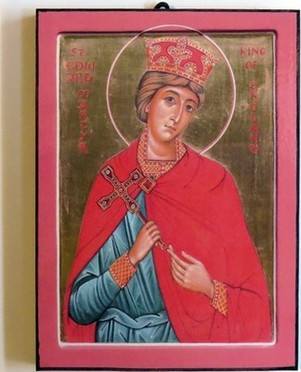 Edward the Martyr (Old English: Eadweard; c. 962 – 18 March 978) was king of the English from 975 until he was murdered in 978. Edward was the eldest son of King Edgar but was not his father's acknowledged heir. On Edgar's death, the leadership of England was contested, with some supporting Edward's claim to be king and others supporting his much younger half-brother Æthelred the Unready, recognized as a legitimate son of Edgar. Edward was chosen as king and was crowned by his main clerical supporters, the archbishops Dunstan and Oswald of Worcester.

The great nobles of the kingdom, ealdormen Ælfhere and Æthelwine, quarrelled, and civil war almost broke out. In the so-called anti-monastic reaction, the nobles took advantage of Edward's weakness to dispossess the Benedictine reformed monasteries of lands and other properties that King Edgar had granted to them.

Edward's short reign was brought to an end by his murder at Corfe Castle in circumstances that are not altogether clear. His body was reburied with great ceremony at Shaftesbury Abbey early in 980. In 1001 Edward's remains were moved to a more prominent place in the abbey, probably with the blessing of his half-brother King Æthelred. Edward was already reckoned a saint by this time.

A number of lives of Edward were written in the centuries following his death in which he was portrayed as a martyr, generally seen as a victim of the Queen Dowager Ælfthryth, mother of Æthelred. He is today recognized as a saint in the Eastern Orthodox Church, the Roman Catholic Church, and the Anglican Communion.